Today we are going to look at five more Behold The Cheese cartoons that I drew.

This was another cartoon that I used as my Facebook profile picture because it was personable. I don’t think Hanna-Barbera will think it’s so charming a drawing, especially without proper licensure.

This next cartoon is about being a rebel. Those “ABSOLUTELY NO FLASH PHOTOGRAPHY” signs and warnings are pretty common, but what happens when you break the rules? In my animated world, you go straight to the hoosegow.

This next cartoon is another “classic” in permanent marker. What does “J.U.D.R.” stand for? That’s up to you. Feel free to comment on what you think it stands for.
I used to use a sieve when I first met people, asking, “Do you like waffles?” I didn’t care whether they liked waffles or not, but I was curious how they would react and reply to the question. Some of the early Behold The Cheese cartoons were similar, where I drew whatever made my neurons tingle to laughter, and if others also thought the cartoon was funny, then plainly their brains must be wired the same way. I later moved toward humor where there was something to “get”, a humor formula that was more dependable. I still hold dear to me these early cartoons where there really is nothing to “get”. “I don’t get it” makes me smile. 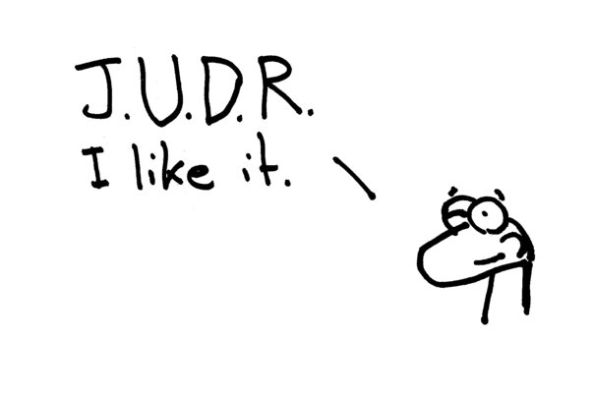 This next one also has nothing to “get”. It’s a hedgehog yelling out “WAIT!!” to a man who’s apparently naked.
I minored in art history, and my classes spent a lot of time looking at images that didn’t represent something accurately, or that didn’t represent anything at all. Photo-realistic paintings may have actually required more grit than great artistic skill, according to the conclusions reached by Tim’s Vermeer (which I officially endorse here). It’s the weird, the abstract, the stuff that doesn’t actually look like the real world that can sometimes stir our emotions, because emotions don’t have any real form. I’m not saying this drawing is THE statement about waiting, but I am saying that art doesn’t have to be photo-realistic to be art, and that cartoons don’t have to be about anything to be cartoons. 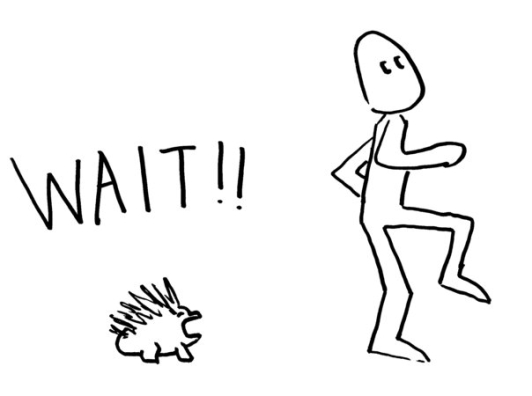 This fifth cartoon is one of the early cartoons that again isn’t about anything. I think it was supposed to be Harold Hutchins from the Captain Underpants series, but I drew it very quickly and didn’t care to make it more accurate. He’s on a hoverboard. Hoverboards are cool.

That’s it for now.

What does April 28 mean to you?