(Author’s note: It’s funny to me comparing the lengths of a 69-character tweet and the rest of this piece.)

I made a tweet for the month of April, even though the month has just begun. So many other things have just begun, like relationships with certain people here around the current location of Port Manteau.

I’ve got a hunch that those who know I’m leaving don’t want to think about it. “Jealous” is a word that’s come up. My mom says they’re jealous because I’m actually going after what I want rather than passively living. I said the necessary disturbance in equilibrium is pretty unsettling. Then again, as my dear friend J and I would note during a visit to the natural history museum, some fish had to crawl up on land and be uncomfortable there, or else we’d never exist. Put another way, “There are no fat tigers.”

The tweet, a haiku, is a short account about being in love with someone I barely got to know. She said, “I knew from the moment I met you that we knew each other in a past life.” I was touched by this, and I believed her. She told me this when I was sitting next to her while she was building a fire. I was across from her with candle fire in between before that. I see a fire in her eyes and I think she sees the fire in mine. I’m a Leo, she’s an Aries, and by the words of astrology we’re supposed to be hopelessly linked by our common element of fire. Fire entwines us. I have to think that if past lives actually exist, mine was spent sitting next to her previous form by the fire.

All I will have to think of her soon are two of her drawings, one she made by the candle fire mentioned. One day I will probably burn these in a fire.

I completely forget that she has a boyfriend when I’m around her. Why does she always sit so close to me?! I can’t imagine her boyfriend sets her on fire; he’s just around with arms around.

Why do I always fall in love with a woman who’s taken?! Do I find it more interesting that way? Do I have no hope for single ladies? Sorry, Beyoncé. Really, if I’ve got any fetishes, it’s got to be that I can’t have you. I sometimes think I’m the Paperman, where the challenge to get to you is the most appealing part. I’m Wile E. Coyote, where it’s the chase, the anticipation, rather than actually eating the Roadrunner that I need. Captain Ahab fits, too.

My friend P says that I’m not romantic. (Then again, upon describing my morning spent dancing to 60s rock in swim trunks simultaneously eating breakfast, he called me quite the romantic devil.) I can’t think of anything more romantic (in the general sense), than wanting the impossible and being completely irrational. (Or as my friend Bee (B?) would quote Tom Robbins, “Love is the ultimate outlaw. It just won’t adhere to any rules.”) This is shown in the picture below, Wanderer Above the Sea of Fog by Caspar David Friedrich. I see myself as the man in this picture. I perch on perilous precipices with that pose, pining. 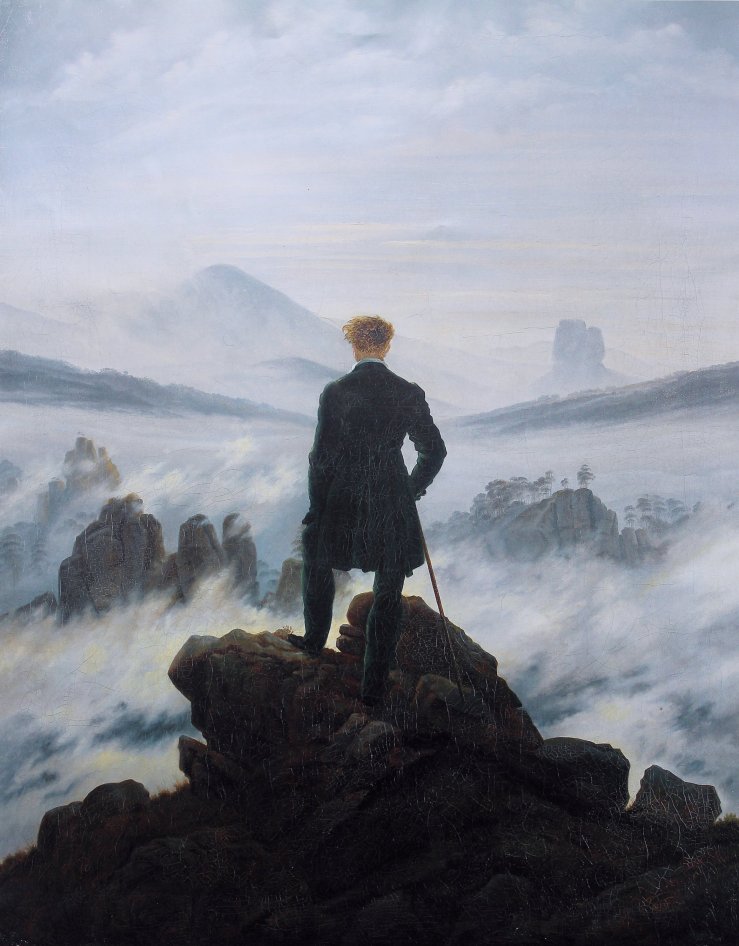